The UK has been fortunate in as much as there have been few serious accidents directly resulting from the ADR carriage of dangerous goods. However, there are frequent minor accidents involving vehicles carrying dangerous goods and occurrences of loss of containment.

Proper identification of vehicles and information about the goods they are carrying is therefore important. The Health & Safety Executive's (HSE) experience from roadside checks is that about one in three vehicles carrying dangerous goods which are selected for inspection exhibit breaches of one sort or another.

In the UK, an Emergency Action Code (EAC) must be used. This system of marking must not be confused or combined with the International ADR marking, which uses Hazard Identification Numbers (HIN), also known as the Kemler Code.

EAC's, also known as Hazchem codes, are  three-character code that must be displayed on all GB registered road and rail vehicles that carry dangerous goods on domestic journeys within the UK.

The ADR plate below shows the EAC in the top section and the UN Number, which identifies the substance, in the bottom section. 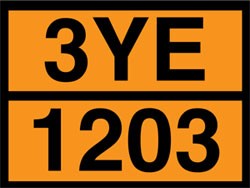 The characters and numbers in the EAC indicate to the emergency services and first responders what action should be taken during an incident involving dangerous goods as an immediate assessment of the situation is crucial in the first few minutes of an incident.

EAC’s are characterised by a single number (1 to 4) and either one or two letters depending upon the hazard.

The EAC is interpreted by the Emergency Action Code pocket cards, the latest version of which is shown below. 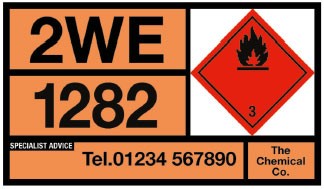 EAC's or Hazchem Codes are designed to be used by the emergency services in conjunction with Emergency Action Code Cards shown below, which are intended to be carried by emergency service personnel. The cards indicate the action that may be necessary except for Additional Personal Protection (APP) and the use of alcohol-resistant foam during the first few minutes of an incident. 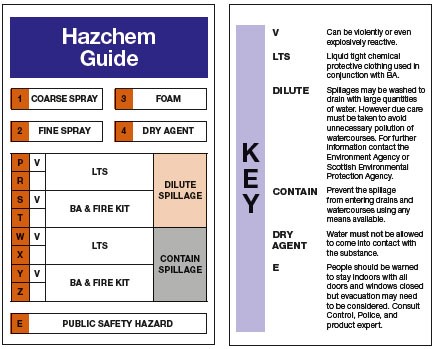 The ADR Hazard Identification Number HIN, also known as the Kemler Code, is to be used on road and rail vehicles with tanks etc. carrying bulk loads of dangerous substances.

The ADR plate below shows the HI Number in the top section and the UN number, which identifies the substance, at the bottom.

The HI number consists of two or three figures. The first figure of the Kemler Code indicates the primary hazard, the second and third figures generally indicate secondary hazards. Doubling of a figure indicates an intensification of that particular hazard. Where the hazard associated with a substance can be adequately indicated by a single figure, this is followed by a zero.

If a hazard identification number is prefixed by the letter ‘X’, this indicates that the substance will react dangerously with water.

Placarding and Marking of Vehicles

As with marking and labelling, placarding and marking mean different things, and apply to vehicles and containers, Multi-Element Gas Containers (MEGCs) as defined in ADR 1.2.1, tank containers, and portable tanks.

Placarding is the process of placing on the tank or container etc. the hazard diamonds referred to in column 5 of Table A (analogous to the labelling of packages). The precise details of sizes etc. are at ADR 5.3.1.7. For small tanks or containers, smaller placards can be used and ADR 5.3.1.7.3 allows 'package labels' to be used.

Marking is the process of placing on the vehicle and the tank, container etc., the orange plates. See ADR 5.3.2.

In all cases, the plain orange plates for vehicles carrying packages are as described in ADR at 5.3.2.1.1.

A plain orange plate is fixed at the front and back of the transport unit' (see Fig 2). Note the extra requirement for vehicles carrying Class 1 (explosives) and Class 7 (radioactive substances) to display placards (hazard diamonds) on both sides and the rear of the vehicle (ADR 5.3.1.5).

This is similar to the above but in this case, the freight container should display relevant placards (hazard diamonds) on all four sides of the container (see Fig 3). 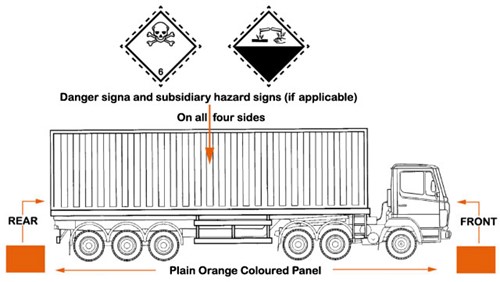 GB registered vehicles on GB domestic journeys must be marked with the EAC and include a telephone number for advice in the event of an emergency. There is a  requirement to display the plain orange plate at the front of the vehicle 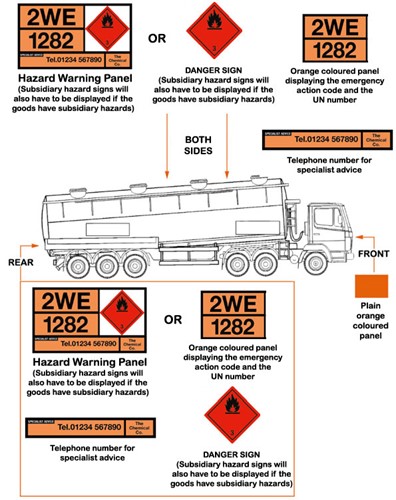 It may also be appropriate to affix the Environmentally Hazardous Substance (EHS) mark on both sides and the rear.

Vehicles with tanks etc. on international journeys must show the HI Number (Kemler Code) in addition to the other relevant marks and placards.

The ADR plate should be displayed at the rear and both sides, with a plain orange plate at the front. Where one substance only is carried it is permissible to display plates at front and rear only, provided the front plate also carries the HI Number and UN Number. Under ADR there is no requirement to display a telephone number.

The following links will provide additional reading material on this subject.