Following extensive and successful trials on a stretch of the M6 motorway near Birmingham between June 2004 and December 2005, VIPER, the enforcement agency’s traffic management system that incorporates Automatic Number Plate Recognition (ANPR) and Weighs In Motion System (WIMS ) technology, was rolled out to 14 motorway locations across the UK. During its trial, this new technology achieved a 700% improvement in identifying and prohibiting overweight vehicles.

The system was a joint programme between Driver and Vehicle Standards Agency (DVSA, formerly VOSA ), the Highways Agency (HA), the Department for Transport (Dft) and the Central Motorway Police Group (CMPG). The results were impressive, with over 95% of overweight vehicles identified and stopped by VIPER leading to a prohibition being issued and the vehicle being taken off the road.

ANPR and WIMS play an important part in the move towards targeted enforcement. By integrating these technologies, offending vehicles can be specifically and accurately identified for possible action from a remote location, dramatically cutting the need to inconvenience law-abiding drivers.

The trial was designed to gauge the equipment's usefulness in allowing the DVSA to identify overloading offenders more easily. It was hoped to achieve more effective use of the enforcement body’s resources and, at the same time, reduce the burden on compliant operators by focusing mainly on potential offenders. There are also knock-on effects for the Highways Agency in the shape of reduced abnormal carriageway erosion and incident-related congestion.

The reduction on the burden of compliant operators and focusing mainly on potential offenders allows DVSA to:

How does the system work?

The system recognises the vehicle and measures its speed and weight, it then compares these findings with the information in the DVSA database.

If the vehicle is overloaded, the system sends an alarm to the supervising officer who then informs the nearest traffic police patrol car about the suspected vehicle. The officers stop the vehicle further along its journey and direct them to the nearest control point. On average officers may stop four trucks per hour. 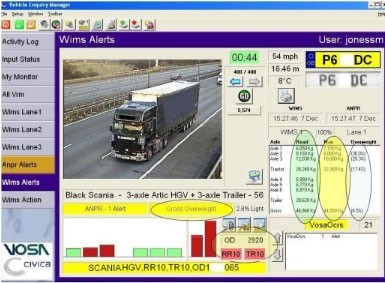 From the image above, the following data points are applicable:

It is important to know that the system also recognises vehicles from abroad even if their data does not appear in the DVSA database. Approximately 50% of the overloaded vehicles are known to be from overseas.

DVSA officers are also alerted if the driver is speeding. Most vehicles of this size are fitted with speed limiters so the police can pull the vehicle over to check that it has not been tampered with and take appropriate action for the offence.

The scales mounted on these British roads are so accurate that in almost every case, the suspected overloaded vehicle is re-weighed on a set of axle pads or weighbridge at the DVSA control point and the original reading is confirmed. The driver/company is then given the appropriate fine and actions take place to lighten the vehicle load before it can continue on its journey.

How accurate is the system?

One of the trial's main objectives was to focus on the equipment's accuracy, both in its ability to identify correctly vehicles' registered numbers and its ability to weigh those vehicles within acceptable enforcement tolerances. When vehicle test results were analysed and compared with dynamic axle weighbridge readings, it was found accuracy levels were extremely high, unsurpassed by any other weigh-in-motion equipment used.

Where are the WIMS located?

The agency does not provide information on the location of the WIMS, however, they are known to be sited in action on the M25 near Clacket Lane Services, Perry Bar and Dartford.

It is also known that there are at least 11 more locations in “strategic parts of the UK road infrastructure”. It must be noted that it is NOT possible to get around the sensors on the hard shoulder.

What are the benefits?

Overloaded vehicles pose a number of risks that DVSA wants to reduce, including:

There can be no doubt, ANPR when combined with other technologies such as WIMS is helping make the UK roads safer by enabling very accurate identification of overweight vehicles that potentially cause a danger to other motorists. The reduction in damage to UK roads caused by the removal of illegal overweight vehicles helps reduce the costs of premature road repairs, allowing resources to be targeted where needed.

How does Weigh in Motion help?

Heavy vehicles affect the infrastructure in several ways. One is that the road network can become crowded with large lorries, impairing manoeuvrability for other vehicles. Another is that heavy vehicles can crack and damage the road surface, especially if they are overloaded. As the roads deteriorate, so too does the quality of travelling for all road users who depend on fast, reliable and safe transportation. Weigh-in-Motion Systems prevent overloaded vehicles from accessing these roads, and so reduce road wear and tear.

Road maintenance is also costly and time-consuming, and the government and county councils need to budget for works using the most recent and accurate data. Motorways with increased heavy truck traffic are bound to fall into disrepair quicker than others. They also generally need repairing sooner than expected as traffic flow accelerates at unprecedented levels. Using WIMS helps local authorities plan and budget more efficiently so saving taxpayers’ money.

Another reason to make use of WIMS is public safety. Vehicles that have been loaded incorrectly may cause traffic incidents as a result of a number of factors and it should therefore be noted that a collision involving an overloaded vehicle can cause a tremendous amount of damage.

WIMS is also playing a significant role in Europe. In September 2019 following extensive trials on the D7 in the Czech Republic, WIMS was approved and is now in operation on the D7. As a result of the success of the system, the government are planning to open a further 15 WIMS stations throughout their road network. There is also potential on regional roads, which are often damaged by overloaded trucks travelling short distances.

So far, direct enforcement via WIMS is legal in the Czech Republic, Hungary and Russia.