Even a short period of driving under EU rules during any day by a driver will mean that they are in the scope of the EU rules for the whole of that day and must comply with the daily driving, break and rest requirements, the weekly rest requirement and driving limit.

After a driving period of no more than 4.5 hours, a driver must immediately take a break of at least 45 minutes unless they take a rest period. A break taken in this way must not be interrupted. For example:

A break is any period during which a driver may not carry out any driving or any other work and which is used exclusively for recuperation. A break may be taken in a moving vehicle, provided no other work is undertaken.

Alternatively, a full 45-minute break can be replaced by one break of at least 15 minutes followed by another break of at least 30 minutes. These breaks must be distributed over the 4.5 hour period. Breaks of less than 15 minutes will not contribute towards a qualifying break, but neither will they be counted as a duty or driving time. The EU rules will only allow a split-break pattern that shows the second period of the break being at least 30 minutes, such as in the following examples:

The above split-break pattern is illegal because the second break is less than 30 minutes.

A driver ‘wipes the slate clean if they take a 45-minute break, or qualifying breaks totalling 45 minutes before or at the end of a 4.5 hour driving period. This means that the next 4.5 hour driving period begins with the completion of that qualifying break, and in assessing break requirements for the new 4.5 hour period, no reference is to be made to driving time accumulated before this point. For example:

The maximum daily driving time is 9 hours, for example:

The maximum daily driving time can be increased to 10 hours twice in a fixed week, for example:

Daily driving time is either:

The maximum weekly driving limit is 56 hours, which applies to a fixed week.

The following diagram shows an example of how this might be achieved:

The maximum driving time over any two-weekly period is 90 hours; for example:

The following is an example of how a driver’s duties might be organised in compliance with the rules on weekly and two-weekly driving limits: 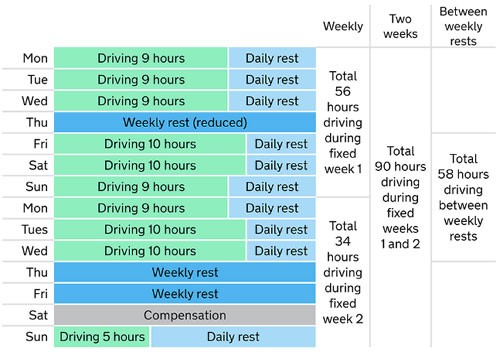 The working time rules that apply depend on whether a vehicle is driven in the scope of the EU or GB domestic drivers’ hours’ rules.

If you operate a vehicle in the scope of the EU drivers’ hours rules, then you are subject to the Road Transport (Working Time) Regulations 2005 (as amended – ‘the 2005 Regulations’), unless you are an occasional mobile worker (see text boxes at the end of this Annex for definitions).

The main provisions of the 2005 Regulations are as follows:

The reference period for calculating the 48-hour week is normally 17 weeks, but it can be extended to 26 weeks if this is permitted under a collective or workforce agreement.

There is no ‘opt-out’ for individuals wishing to work longer than an average 48-hour week, but breaks and ‘periods of availability’ do not count as working time.

Generally speaking, a Period of Availability (POA) is a waiting time, the duration of which is known about in advance. Examples of what might count as a POA are; accompanying a vehicle on a ferry crossing or waiting while other workers load/unload the vehicle. For mobile workers driving in a team, a POA would also include time spent sitting next to the driver while the vehicle is in motion unless the mobile worker is taking a break or performing other work such as navigation.

In addition, drivers are affected by two provisions under the Working Time Regulations 1998 (as amended – ‘the 1998 Regulations’). These are:

If a driver only occasionally drives vehicles subject to the EU drivers’ hours’ rules, he/she may be able to take advantage of the exemption from the 2005 Regulations for occasional mobile workers (see text box below for the criteria).

Self-employed drivers were brought into the scope of the EU Working Time Directive 2002/15/EC in GB in May 2012, by the Road Transport (Working Time) Amendment Regulations 2012.

DVSA enforces the provisions of the 2005 Regulations and the requirement for health checks for night workers (under the 1998 Regulations).

For further information relating to annual leave, the Advisory, Conciliation and Arbitration Service (ACAS) national helpline can be contacted on 0300 123 1100, for free support and advice.