Every year, within the Road Freight industry, objects which fall on to people from vehicles, cause deaths and serious injury.

Many of these incidents are as a result of poor load security (restraint) on goods vehicles being loaded/unloaded in the workplace or at drop off destinations.

Some simple measures can prevent many of these incidents from occurring, with the top of the list being 'common sense' e.g. there is no point in loading a heavy, or cumbersome object on top of something lighter or smaller and whilst this seems blatantly obvious, unfortunately it does happen, and far too often.

The Road Traffic Act 1988 (as amended) states that:

"A person is guilty of an offence if he uses, or causes or permits another to use, a motor vehicle or trailer on a road when:

The total load restraint system will generally consist of a combination of:

There will be other factors concerning safe and secure loads, such as:

In all circumstances, and on every occasion, it would be appropriate to secure the load correctly to ensure nothing moves from within a box or curtain sided vehicle body, or on an open flat-bed that has been securely roped and sheeted. Benefits accrued from all, and any, of the restraints used, should be regarded as right and proper.

Loads that are carried on step-frame trailers or beavertail rigid vehicles that are the subject of being ‘tied’ to the trailer or vehicle bed, should be restrained by means such as:

The final method of restraint, such as chains, should always be checked periodically, as the movement of the vehicle and/or condition of today’s road surfaces can impact upon the security of the restraint and therefore must be checked at periodic intervals during the duration of the journey.

Given the wide diversity of general loads, it is not possible to suggest loading methods for all the types of load likely to be encountered. However, the basic precautions outlined above will always be applicable.

Vehicles equipped with headboards, tailboards or sideboards, or van bodies will provide some restraint, however, additional load restraint MUST be used in all cases as detailed below.

Additional load restraint will be required under any of the following conditions:

Two essential requirements must be satisfied when loading vehicles. These are that the load must be distributed so that:

For maximum stability, the items comprising of the total load should be evenly spread to achieve minimum height and be arranged to form a uniform whole so that no excessive stress is applied to whatever restraining devices are used. Where a part of the load is to be picked up or removed during the course of a journey the effect on gross vehicle weight, individual axle weights and the securing and stability of the load then being carried must be considered during the initial loading and subsequent unloading.

For example, removing a part of the load from behind the rear axle of a vehicle or trailer will reduce the gross vehicle weight, but it will increase the weight on the front axles and may cause individual axles to exceed their plated weights.

The basic principle upon which this Code of Practice is based is that the combined strength of the load restraint system must be sufficient to withstand a force not less than the total weight of the load forward, to prevent the load moving under severe braking, and half of the weight of the load backwards and sideways (see Fig 3). Vertical movement may occur but this should be overcome if the above conditions are met.

Various types of equipment can be used for restraining general freight loads. These include;

For the securing of loads inside van bodies and similar load containers, specially designed shoring piles used in conjunction with the appropriate securing fixtures on the vehicle are suitable. Purpose-built restraining devices should only be used for the application, and in the manner approved by their manufacturers.

Boxes must be loaded so that they are prevented from moving in any direction:

Small relatively heavy items, such as small castings, if not palletised or caged:

Careful attention should be paid to points where lashings pass over corners of the load to ensure that the load is not damaged by chain links etc. or that the lashings are damaged by sharp edges. Corner protectors and sleeves should be used whenever necessary.

The friction between individual items in a load will generally be low, particularly if the metal is oiled, and should therefore be disregarded when assessing the total load restraint required.

The friction between the load and vehicle platform will also be considerably reduced if either is wet or greasy. The only exception to this rule is when concrete reinforcing weld mesh is carried. In this case, there is significant friction between the bundles of the mesh loaded on top of each other.

A large mass can be restrained more effectively than several small items and therefore whenever possible, loads should be aggregated into the largest or heaviest unit feasible. This will be controlled to some extent by the facilities available at the point of unloading.

Metal loads can take various forms but they can be broadly divided into 9 categories:

When a load is composed of different items, each part of the load must be secured in a manner suitable to a load of its type. This applies mainly to cross lashings. The longitudinal lashings must be adequate for the total weight of the load, and separators must be used so that no part of the load can move forward independently. The following procedures should be followed when applicable:

There are many types of load other than those mentioned above including:

Regardless of the load type, they will all require various forms of restraint and loading in/on the vehicle and the equipment required to ensure full load security in all cases will undoubtedly vary from load to load.

The majority of containers in use are constructed to International (ISO 1496) or British (BS 3951) standards. A common feature in the construction of these containers is that specially designed corner castings are incorporated which can be used in conjunction with twist locks fitted on the vehicle, to provide a simple and positive means of restraint.

This type of container should only be carried on vehicles fitted with twist locks. Twist locks must be maintained in serviceable condition and a minimum of four used for each container carried. Provided that the twist locks are fully engaged and locked in position, the container will be adequately secured and no further restraint will be necessary.

The operator is confronted with several problems when attempting to carry ISO containers on vehicles not equipped with twist locks. Unlike normal box type loads that spread their weight over a large area, containers are designed to stand on the twist lock sockets or feet that protrude down at each corner. With heavy containers, this produces high point loading that could over-stress a normal platform floor. 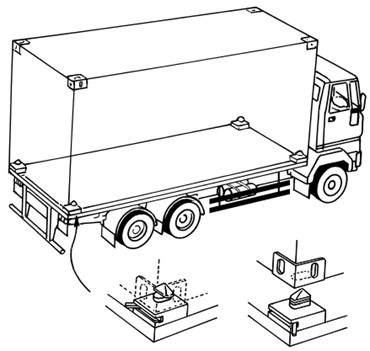 Other platform vehicles may have raised or wide section side ledges which would prevent the container from resting on the platform floor. The resultant interface between the side ledges and the container feet would offer little frictional resistance making it virtually impossible to secure the container on to the vehicle safely and the practice should be avoided.