Rear marker boards for the lighting regulations fall within Schedule 19. There are 13 types of marker boards split into 3 sets as follows:

Motor vehicles with a maximum gross weight exceeding 7,500kg first used on or after 1 August 1982 and trailers with a maximum gross weight exceeding 3,500kg manufactured on or after 1 August 1982 must be fitted with rear markers (apart from excepted vehicles). Only vehicles exempt from the prohibition to show any other light but red to the rear by way of rear markings may have them fitted optionally.

Amendments to the lighting regulations mean that goods vehicles first used on or after 1 April 1996, and trailers manufactured on or after 1 October 1995, have to be fitted with rear markers with better reflective properties which comply with UNECE Regulation 70 rather than British Standard BS AU152.

A further amendment to the lighting regulations require markers fitted to goods vehicles first used from 10 July 2011, and trailers first manufactured from 10 July 2011 to comply with UNECE Regulation 70.01. However, the amendment made the requirement to fit rear markers optional on goods vehicles and trailers which are fitted with conspicuity markings following UN ECE Regulation 48.03, but if fitted optionally the markers must have a 70.01 approval marking. There is no retrospective fitting requirement and 'existing' vehicles can be fitted with markers to the new specification voluntarily.

Below are all 3 sets in image format, with tables specific to each indicating the type, dimensions and which vehicles they are fitted to.

The markers illustrated below must be used following Table1(below). It is important to also note the specification of the rear markers.

The colour specification of rear markers must be red fluorescent material and yellow reflex reflective material with all/any lettering being black.

Position Rear reflective markers must be fitted to meet the following requirements: 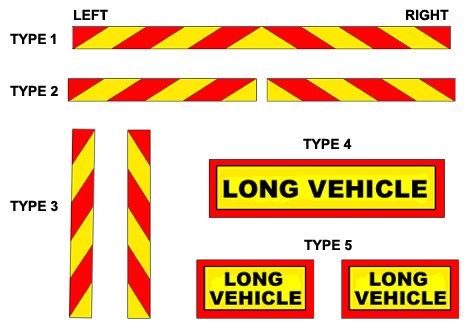 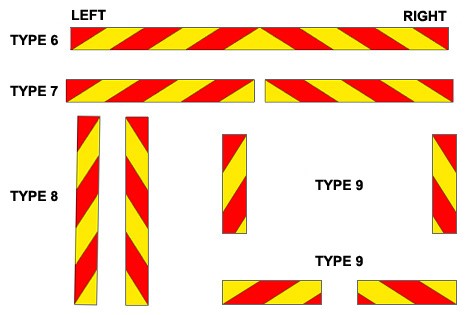 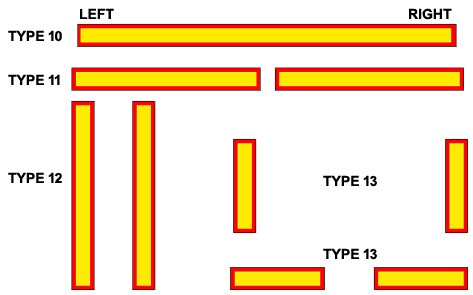 The introduction of additional outline reflective markings on goods vehicles came into effect from 10th of July 2011.

The UN Technical Committee (UNECE) has published the requirements in an amendment to Regulation 48, which will apply additional side and rear markings to new goods vehicles over 7.5 tonnes and new trailers over 3.5 tonnes. All tapes are required to be certified to regulation ECE104.

The technical requirements are contained in European regulations on vehicle lighting, paragraph 6.21 of UNECE Regulation 48.03 amended to Supplement 31. This sets out the layout that must be used, any exemptions or derogations that may apply and the colours that should be used. An example of the basic layout is shown below. However, the exact layout will depend on the design and intended use of the vehicle.

Conspicuity markings placed on the side of a vehicle must be either yellow or white and on the rear either red or yellow. They must also be marked to show that they have been approved to UNECE Regulation 104.

All conspicuity tape should be a single layer to prevent delamination and should be durable and easy to install.

Rear marker plates approved to 70.01 may be used to form part of the rear conspicuity marking, details are given in UNECE Regulation 48.03.

From 10 July 2011, it is required to fit either ECE70.01 Marker Boards or the reflective tapes as shown below.

Various companies manufacture markerboards but to comply, they must display the EC homologation number on them. This ensures they have been tested to the standard required. For more information on rear marker boards, please visit the Markings page in this section.

Without a doubt, these markings have contributed greatly to driver peace of mind and other users of road vehicles as well as pedestrian safety.